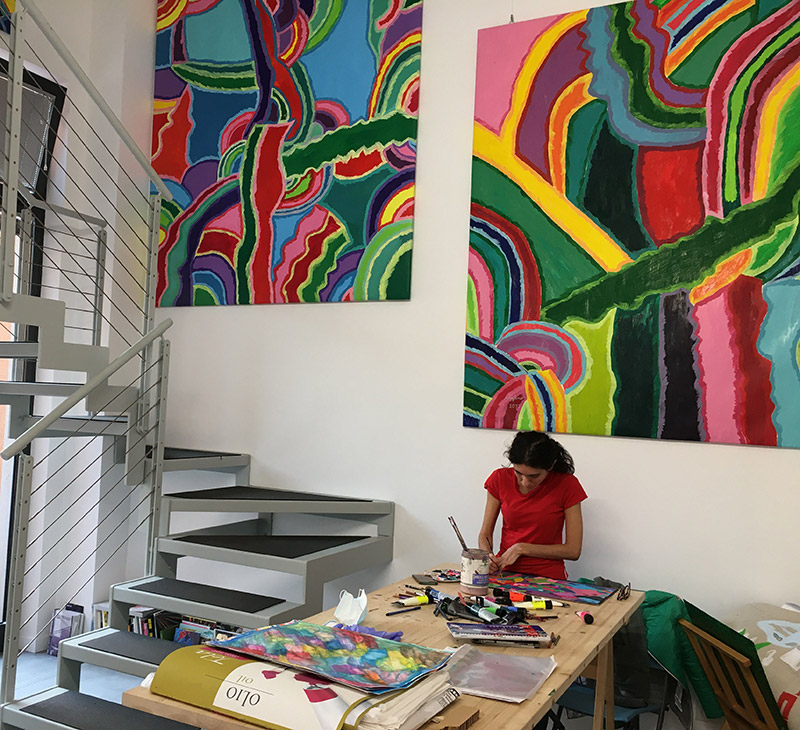 Alice Voglino is one of the emerging painters that belong to the Italian contemporary art scenario. She uses the language of abstract painting to describe the feelings and emotions of everyday life through colours.

Her personal use of colours is what makes her works unique. It allows her to express and communicate her message of harmony and beauty through a colourful and abstract technique featuring full-bodied and fast strokes. She lives and works in Verona, Italy.

If you wish to know more about Alice Voglino’s contemporary art
please write to: info@alicevoglino.com 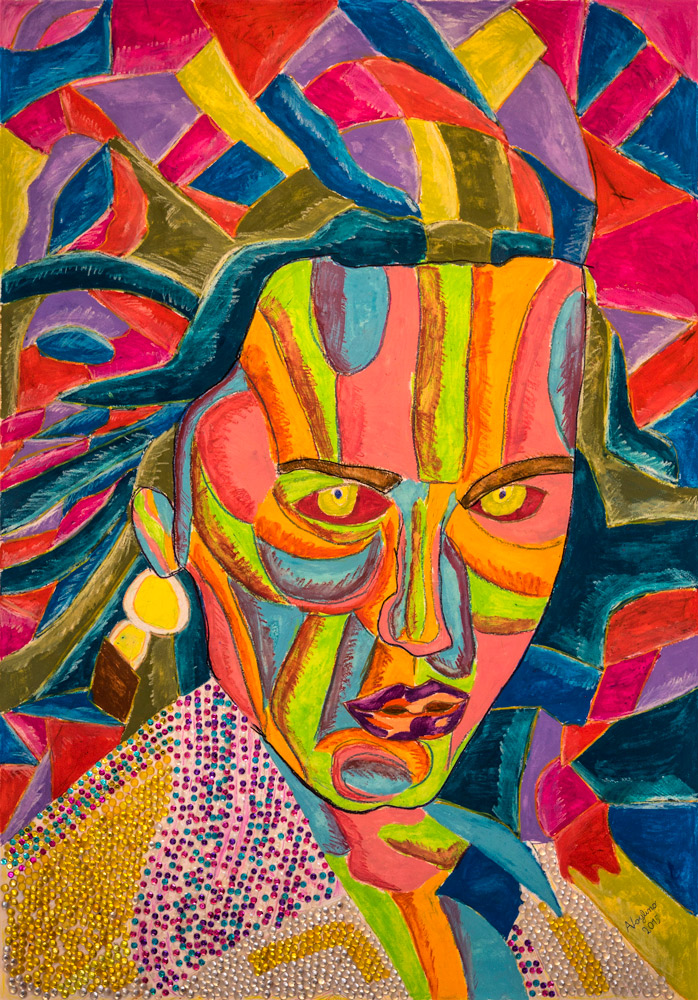 “My sensitivity leads me to observe my surroundings with curiosity and to live it through myself. People and their relationships with the world, interest me. With people, I mean groups of material and energy, of thoughts and emotions. I look at them and study them, through them I understand myself and what I can be on this Earth. That is why I have concentrated my artistic research on the perception of reality, communicating the essence of things through my art, attempting to communicate energy, harmony and beauty.

Color is my vehicle for expression, on any media. Its clarity and body allow me to describe my feelings, which become material. The invisible that becomes visible.

Painting is a kind of urge for me. I often find myself sketching some spontaneous, coloured signs. Starting from their movement, from the emotion they inspire in me and their narration, I then move to make them alive on canvas. I let the colour speak to me, talk to me about its story and guide me, as in a symbiotic relationship, to the point that I sometimes feel that I’m becoming colour myself.

My work is finished when colours become a chromatic harmony that communicates rhythm, energy, movement and strength. Spectators are invited to embark on a visual path that elicits emotions and that promises to offer a superb visual and sensorial experience.” 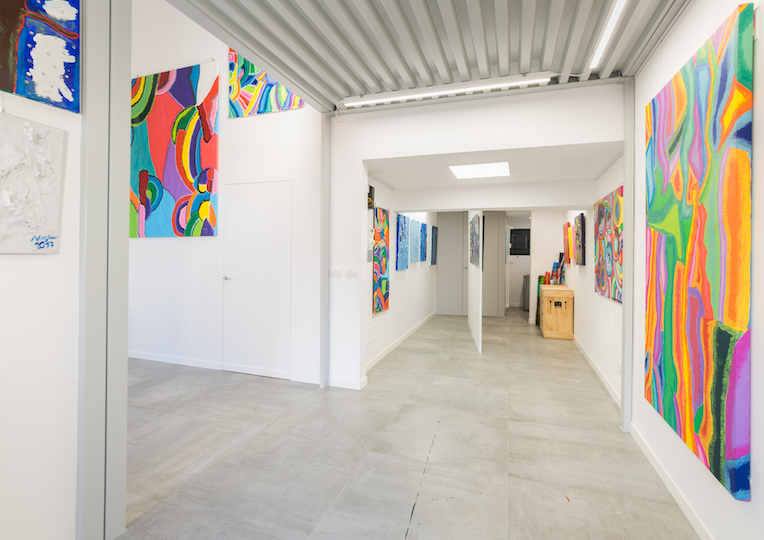 Alice Voglino (b. 1995) graduated from the Scuola di Pittura at Accademia di Belle Arti in Verona, the city where she lives, presenting her thesis on the energy and emotions of color.

Her first approaches to color occurred when she was a little girl, just 8 years old, and soon it became her way of communicating herself, her emotions, and her feelings.

Curious as to how people perceive themselves and the world, which for Alice is a combination of energy and matter, her works intend to bring people to harmony, using color as an attractive element, leading them to observe and listen, as if meditating.

She began showing her work when she was 18 years old in Innsbruck (Austria) and since then has exhibited in a number of galleries in Italy (Genoa, Piacenza, Mantua, Verona).

She has worked with a number of companies: in 2014, Fondazione Masi in Verona chose one of her paintings to create a decorative fabric by La Fabbrica Lenta di Bonotto S.p.A.; in 2017 Nico Lazaridi Winery, a Greek vineyard, acquired two of her paintings to be reproduced on different wine labels; in 2018 she participated in the event Exhibition1.0, created for the Terziario Donna 2018 prize, where Confcommercio Terziario Donna Verona promoted young emerging artists as new businesses in the area; artist featured in the company headquarters of Tita Italian Wine in Miami – USA (2020).

She lives and works in Verona (Italy) where in 2019 she opened her atelier.

Curious, courageous and dreaming of being immersed in a world of colours, Alice Voglino develops her artistic research by following the concrete game of abstract art. Traces of the uniqueness and peculiarities of the people she meets can be found in the shapes and colours she impresses in her paintings. She succeeds in becoming small in order to see and study how the world moves, and in growing up when she recounts the world in her works. Her art production is permeated by captivating inputs that leave the beholders the freedom to translate them by using their imagination. Alice Voglino’s works give us a chance to access a world of the imaginary that is utterly individual and personal, a world that becomes universal once we’ve entered it and start to observe it from the inside. Alice Voglino paints with a kind of lightness that helps her to analyze and represent things in depth. She follows a special harmony in the composition by using colours that evoke fascination and different impressions. Body and mind act simultaneously while Alice Voglino creates her art pieces, with signs and strokes that move freely and quickly around the art media she uses. The highly tactile quality of her works is the result of a unique emphasis and confident strokes that contribute to fill the composition with energy and determination. For Alice Voglino the creative act consists in breaking down what she wants to represent into essential elements, thus freeing everything from its objective and figurative context. Shapes are released from constructive structures, therefore the representation is simplified and any references to reality disappear. Being free from aesthetic conventions, Alice Voglino conveys vital energy and pours it into her vibrant works of art. Alice Voglino’s works reveal a powerful fascination that is entwined with feelings and emotions. Thanks to her special sensitivity and mastery, she is able to capture such an extraordinary compound and translate it into matter and colours.
Serena Achilli, Independent Curator

The expressive freedom of Alice Voglino is a truly overwhelming visual experience. The lively and unbridled colours that she uses in her works create complex compositions where the eyes continuously get lost and find their way again, through chromatic hints that chase one another in each and every one of her paintings.The communicative power of these abstract works is attractive and mysterious at the same time. Each painting, although autonomous, seems to require a continuous and intense interaction with the viewer, by emanating an almost fully absorbing emotional impact that involves every sense, and not just the eyes.In order to appreciate its most intimate and true qualities, each work by Alice Voglino requires a far-reaching and participatory sensory disposition.
from Arte Nuova 2019 catalogue,  published by Ed. Giorgio Mondadori

Voglino’s painting combines reason and sentiment, and she pours on to canvass her incredible creative urgency, taking strength from the choice of combining vivacious, material colors with ideal, instinctive images. In my opinion, Alice Voglino must be recognized for her extraordinary ability to transport her audience to another world, a world where the artist’s words and desires are the most intimate “expression of life”.
Camilla Compagni, curator

In Alice Voglino’s works, colors flow in the tide of expressive urgency, a type of trauma that tends to create relief maps, with an inclination both material and satellite. The beholder is bound to a land and is invited to decipher the chromatic codes, the reliefs and the abysses. Topography becomes phantasmagorical space that, more than describing boundaries traces the infinite repetition of a non-geometric shape. It is like having a diviner’s stick, discovering water springs, one at a time.
Elena Colombo, Art Critic

Alice Voglino’s work is undoubtedly original, and has a very rare feature: communicate the meaning of life elevated by the joyfulness of light, the multitude of colours, the fragrance of perfumes, feeling the sun and the wind on our skin, the energy and harmony given by nature. Each work expresses Alice’s sensitivity, a person in love with the beauty around her and which inspires her. The artist adds her touch of her perception of creation: the joy of beauty. A constant element in her work, which is normally on canvas using various materials, is her way of decomposing light and the dynamic narrative we perceive. Alice’s art is not just to be looked at but to be experienced.
Vera Meneguzzo, Art Critic

Although quite young, Alice Voglino has a substantial, interesting résumé of exhibitions, and her free, fresh, immediate expression has grabbed the attention of the most severe qualified critics, enthusiasts, and collectors. Justly, we can affirm that our artist’s pictorial world revolves around shape and color, and that, above all, for Alice color is an effective tool for communication, an extraordinarily universal language for the expression of voice, emotions and sentiments. In her current expression, we find explicit references to Lyrical Abstractism, to Arte Informale and Arte Povera, but Voglino is free from any cubbyholing, thanks to her innate, instinctive sense of color, her liberty and creative ingenuity, her unbridled desire to find herself and to be found in painting, a magical path capable of bequeathing strength and harmony.
Luciano Carini, Art Critic

The works displayed on this website are the result of the creative activity and human inventiveness of the contemporary artist Alice Voglino. She owns the intellectual property of the works which are subject to copyright. Any reproduction or use of such works without prior authorization is strictly prohibited.
If you are interested in using and/or publishing an image of one of the works, please send your request to: info@alicevoglino.com